Here at Chelsea Cosmetics Melbourne, we are thrilled to offer CoolSculpting as the cutting-edge technology for getting rid of stubborn fat. It is a totally non-invasive liposuction procedure that eliminates the need to use knives, needles, or even lasers. Instead, CoolSculpting employs revolutionary technology that uses super low temperatures (between 2-7 degrees Celsius) on problem areas to reduce fat.

Enquire a Complimentary Assessment Now
Get A Quick Quote

Coolsculpting Before & After Photos

CoolSculpting, which is also referred to as fat freezing or cryolipolysis, is a non-invasive, fat-reduction treatment that reduces the number of fat cells in a specific area. The technicians at Chelsea Cosmetics in Melbourne, Australia, use Zeltiq CoolSculpt technology to contour the body. With no downtime or incisions, many people are choosing CoolSculpting over liposuction, which is the traditional surgical procedure for fat reduction.

Get results like these with just two CoolSculpting sessions!
Image Credit: http://plushdermalaser.com/coolsculpting-before-after-photos/

How Does CoolSculpting Work?

The technicians at Chelsea Cosmetics in Melbourne, Australia, can use cryolipolysis to contour a client’s body. During this procedure, the Zeltiq machine freezes fat cells, which ultimately leads to their death. Nonetheless, the client’s neighbouring nerves, blood vessels, skin and muscles remain unharmed. The length of a client’s treatment depends on the number of areas he or she would like the Zeltiq technician to address. The total treatment time ranges from a half an hour to an hour.

What Happens to the Dead Fat Cells?

A few weeks after a cryolipolysis treatment, the dead fat cells pass through the liver and are expelled from the body. The client sees his or her preliminary CoolSculpting results at the 3-month mark, with improvements continuing for another 3 months. Once the client reaches the 6-month mark, final results are evident.

How Effective is CoolSculpting?

At Chelsea Cosmetics, cryolipolysis for the reduction of fat is very effective. During a fat-freezing treatment, the Zeltiq machine uses controlled cooling to reduce the amount of fat in the treatment area by as much as 25%.

Which Areas of the Body Can Be Treated With CoolSculpting?

CoolSculpting is also used to address visible bulges of fat that are located:

Cryolipolysis can also be used to tone the: 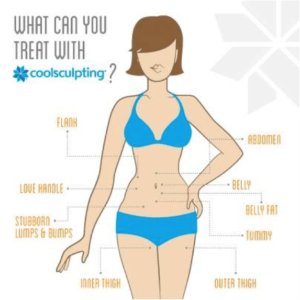 Zeltiq Coolsculpting is a lunch time procedure, where you can painlessly reduce stubborn excess fat in any concerned areas. Image Credit: https://biotechwellnesscenter.com/blog/aventura-weight-loss/

Although cryolipolysis is not a treatment for cellulite, it can reduce the fat that bulges out, creating some of the dimples. Therefore, fat-freezing treatments can, indirectly, reduce the visibility of cellulite.

Are There Any Other Ways to Reduce the Visibility of Cellulite?

Yes, there are other nonsurgical treatments available (e.g., dermal fillers) that clients can use to decrease the visibility of their cellulite even more.

A CoolSculpting Treatment in Melbourne, Australia: What Are the Key Benefits?

Benefits CoolSculpting treatments can provide clients include that cryolipolysis:

Zeltiq’s dedication to excellence places it at the top of the list for fat reduction via cryoplipolysis. This dedication is evident in their desire to continue providing clients with results that surpass their competitors by investing more into research and development than many of them. It is this dedication, treatment efficacy and widely proven results that make Zeltiq’s CoolSculpt technology Chelsea Cosmetics’ number one cryoplipolysis treatment choice.

One of Zeltiq’s most recent developments is their CoolMini hand piece applicator. Upon comparison, it is clear that Zeltiq’s hand piece is far superior to its competitors. The competitor’s hand piece is deep and it uses high suction, which makes the fat-freezing process somewhat uncomfortable for the client. Furthermore, due to the design of the competitor’s hand piece, suction failure is a frequent occurrence. This suction failure decreases the effectiveness of the fat-freezing device, thus, negatively affecting the client’s results. Although this suction failure influences every client’s result, it is the most detrimental to the results of those who have tighter skin in their treatment areas.

Zeltiq’s new hand piece uses high skin-to-surface contact, which means less suction is necessary to attain the results a client desires. In addition, this decrease in the amount of suction necessary means that the client remains comfortable throughout his or her CoolSculpting treatment session.

Using the CoolMini hand piece, which is a small, uniquely designed and highly precise applicator, a Zeltiq technician targets the submental fat that is responsible for creating the double chin. This cryoplipolysis double-chin reduction procedure also includes CoolSculpting treatment of the client’s neck.

Following a fat-freezing treatment on the neck and chin, there is no downtime, so the client is able to return to his or her daily activities directly following the treatment session.

What Makes the Zeltiq CoolSculpt Machine Superior to Other Fat-freezing Machines?

More than a decade ago, Zeltiq CoolSculpt introduced fat reduction via cryoplipolysis. For years, Zeltiq remained unchallenged in the fat-freezing market, which is most-likely why their fat-freezing machine, applicators and techniques are superior to the other brands that are currently available.

In addition, Zeltiq manufactures its machines in the U.S. and the fat-freezing machines that are manufactured in other countries around the world attempt to mimic the results that technicians can achieve with the Zeltiq CoolSculpt machine, to no avail. Furthermore, Zeltiq CoolSculpt is the only FDA-cleared and TGA-approved cryolipolysis technique available.

The Cons of Using CoolSculpting for Fat Reduction

Using the Zeltiq CoolSculpt machine for fat reduction purposes offers clients less downtime and fewer risks than traditional liposuction, however, as with all procedures; there are some cons to consider.

Cons of cryolipolysis treatments include:

Who Should Consider a CoolSculpting Treatment in Melbourne, Australia?

Men and women who would like to eliminate excess fat in troublesome areas without surgery may want to consider having a fat-freezing treatment.

Physical characteristics that make someone an ideal candidate for CoolSculpting include an individual who:

Who Is Not a Good Candidate for CoolSculpting?

People who have pacemakers, poor circulation or defibrillators are not good candidates for fat-freezing procedures.

Women who are breastfeeding or pregnant must wait until they have birthed their baby and finished breastfeeding to have a CoolSculpting treatment.

An individual who has any skin condition (e.g., dermatitis, eczema) or wound in the treatment area must wait for the issue to resolve before having a cryolipolysis treatment in that particular area.

Each client is unique, which is why the experienced Zeltiq technicians at Chelsea Cosmetics create every client a personalised CoolSculpting treatment package. By customising packages, Chelsea Cosmetics can provide clients with exceptional care and amazing results at a fair price.

An Initial Consultation for Cryolipolysis at Chelsea Cosmetics in Melbourne, Australia

Since clients do not receive any type of anaesthesia during their fat-freezing treatment, they can drive themselves home or use for-hire transportation following their procedure.

The Zeltiq technician wants to know what the client would like to accomplish with cryolipolysis treatments. It is vital for the client to provide a clear picture to the technician; otherwise, it is unlikely that the technician will be able to achieve the results the client desires.

If the client decides to proceed with a fat-freezing treatment, he or she may be able to have a treatment session directly after the initial consultation.

What Happens During a CoolSculpting Treatment at Chelsea Cosmetics?

During the CoolSculpting procedure, the technician places a portion of the fat in the treatment area between two panels. Once in place, these panels begin to cool, reaching 2 to 7 degrees Celsius rather quickly. Cryolipolysis treatments help the technician sculpt the client’s body to create contours that are more desirable.

Initially, clients should expect to feel some discomfort; however, once their skin adjusts to the temperature of the device and the pressure it creates, the treatment is practically pain free.

Although Zeltiq CoolSculpt is one of the safest cryolipolysis treatments available, as with every procedure, there are potential complications and risks to consider. This is true for fat-freezing treatments as well.

The only cryolipolysis technology that the technicians at Chelsea Cosmetics use is the clinically proven, patented and FDA-cleared Zeltiq CoolSculpt technology. 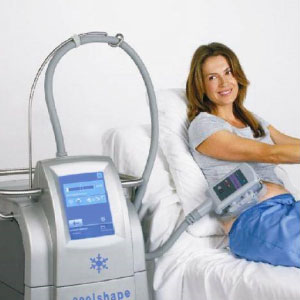 The Zeltiq Coolscupting technology is the only patented Cryolipolysis technology in the market approved by FDA.

In 2015, the Australian Government’s Therapeutic Goods Administration (TGA) branch recognised the safety and effectiveness of this fat-freezing technique to reduce the amount of fat in specific areas of the body. This recognition from the TGA may be one of the reasons cryolipolysis is such a popular option for addressing excess fat in Melbourne, Australia.

How Much Will a CoolSculpting Treatment at Chelsea Cosmetics Cost?

Every client receives his or her own cryolipolysis treatment plan, therefore, the only way to determine the cost of an individual’s fat-freezing treatment is with a consultation.

What exactly is CoolSculpting?

CoolSculpting, or ‘fat freezing’, is a highly effective and non-invasive fat reduction procedure that uses cold treatment to sculpt the body and reduce unwanted fat cells. A nonsurgical medical intervention, CoolSculpting has no associated recovery time, one of its many benefits over traditional liposuction. Additionally, it has been shown to be particularly effective for small areas, such as the chin, hips, and even post-liposuction irregularities, which can all be targeted with CoolSculpting. Numerous studies show that CoolSculpting is one of the most effective and non-invasive fat reduction procedures, with no surgery and no downtime required to help remove extra fat cells from beneath the skin.

What are the Benefits of CoolSculpting?

Here at Chelsea Cosmetics Melbourne, we are thrilled to now offer CoolSculpting as the cutting-edge technology for getting rid of stubborn fat. It is a totally non-invasive liposuction procedure, eliminating the need to use knives, needles, or even lasers. Instead, CoolSculpting employs revolutionary technology that uses super low temperatures (between 2-7 degrees Celsius) on problem areas to reduce fat.

The popularity of CoolSculpting as a fat removal procedure is markedly increasing in Australia. The approval of the technique by the Therapeutic Goods Administration (TGA) branch of the Australian Government in 2015 testifies to the procedure’s safety and effectiveness. CoolSculpting has great procedural accuracy for small areas like the double chin, muffin top, or post-liposuction irregularities.

What areas can CoolSculpting treat?

CoolSculpting is suitable to be used on most of the areas of the body, including smaller, more delicate areas which weren’t treatable in the past. As technology continues to develop, an area which is becoming more popular for targeting through CoolSculpting is the ‘double chin’.

CoolSculpting for double chin reduction has its own unique applicator which is smaller and more precise than the rest of the CoolSculpt applicators. Treatment of the neck is included in this procedure, which typically shows results after one to three sessions. You can return to your normal activities immediately after your treatment - Freeze away your stubborn fat today.

How Does Coolsculpting Work?

Extreme low temperatures (between 2-7 degrees Celsius) are used in CoolSculpting to produce localised reduction of fat deposits: this process of using cold to reduce fat cell volume is called cryolipolysis. The CoolSculpting procedure achieves this process by placing a fat roll between two panels and quickly cooling it to freezing temperatures. This technique allows the technician to sculpt and shape the patient’s body into more desirable contours.

Researchers have found cryolipolysis reduces the treated fat fold thickness by as much as 25%, with results continuing to improve over six months after the treatment.

When will I see the results from Coolsculpting?

Within several weeks of the treatment, the dead, frozen fat cells pass out of the body through the liver—the full extent of the fat loss results are thus revealed in three months. Results will continue to improve over six months after the treatment.

Can you target cellulite with Coolsclulpting?

The appearance of cellulite on the legs, arms, and buttocks, as well as excess fat beneath the chin, can all be targeted using this method.

What makes Coolsulpting a good option for me?